I was fortunate enough a few weeks back to watch a presentation put on by Jim Ratcliffe.  Obsessed with speed and acceleration, he has made Oregon athletes some of the fastest and most successful around.  Quite possibly the most energetic and enthusiastic speaker I’ve ever heard, he’s also a great communicator.  His doctrine: The hips are everything.

Tommy Kono was the most successful American Olympic lifter in history.  He believed that the hips were the power source of the entire body.  Like a rock thrown into water, the more distal the body parts that radiated out, the less potential they have for power production.

*The hips connect to the pelvis.  I can’t reiterate enough how important this guy is.  No pelvic control means inefficient core function.  The hips are dependent on these.

The most effective prepatory protocol that simultaneously trains all three qualities seems to be the snatch.  Utilizing a lighter weight ensures speed and coordination are prioritized.“Force” is typically emphasized in the work that follows.

“Get the arms locked out overhead before the feet hit the ground.”

On the injury/ rehabilitation side of things, this power formula is meaningful because eccentric injury (slow down or absorption, such as most ACLs) results from the inability to handle force, position, or speed.
load > capacity = injury
-Dr. Andreo Spina
Hip flexion/extension coordination at high speeds creates more powerful and injury resistant athletes.

(My videographer kept laughing hysterically at me during these.  I tried to keep it serious.)
Knee Hugs, Froggers, Kicks to Hand
Tall head posture.
Foot should land under body, on the mid-foot.
Going barefoot seems to naturalize this position.
(I’m much too bouncy on at least two of the three — it’s a work in progress). 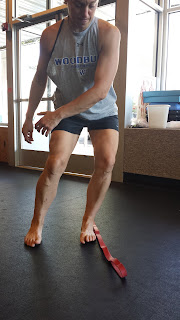 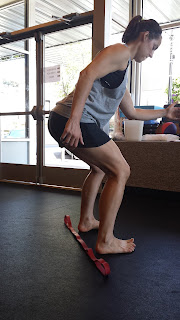 Your hips should cross the start line first.
This one’s beautifully simple.  From the hinge, the hips lead in the direction you want to go.
Push off BOTH feet.