0
January 28, 2015
concepts, Mental
Stretching is bad.  Stretching is good.  It’s like eggs.  You have to seek your own proof and be your own study.  If you can use your stabilizers as stabilizers, you likely know and understand proper positioning, and stretch training can be beneficial to you.

The first key concept is RELAX into the stretch.  Pavel Tsatsouline literally wrote the book on it. 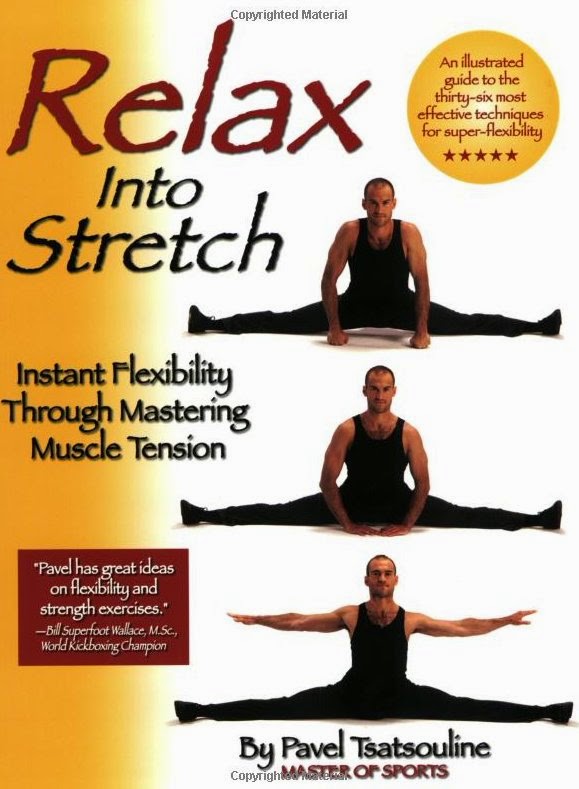 In it, he basically says don’t fight the tension.  Shallow, short breathing and fighting tension just brings about more tension.  Breath deep and use the exhales to ‘sink’ into the movement.
The second main point, and my own tangent to Pavel’s idea, is to MANIPULATE TENSION.  If the body is essentially a network of rubber bands, there is only so much tension that can exist within the web.  There is a cap on the system.  Through the interconnectedness of the fascia and the described limit, you should be able to minimize tension in one area by forcing tension elsewhere.  Controlled contractions in the abdominals or opposing muscle group help dissipate tension in the restricted area, opening it up for further movement.

I first took note of this phenomenon when trying not to squeal during a deep tissue massage.  The pressure on my hip flexors and adductors were brutal.  If I flexed my stomach muscles, however, the elbow into my inner thigh became tolerable.

Why the abdominals?  My guess is because it’s the congruence of most parts.  It’s centrality is what makes it so effective.  (I believe you should feel every movement in your abs, but that’s for another post).  The torso is also home to to the thickest bands of tissue, whose elastic strength, when contracted, leaves room for slack in other bands.

I was recently working with a few gals on beginning 90/90 reaches for hip mobility.  They were having quite a hard time with it, and their face and body language showed they were battling with the leans, trying to coerce their hips into submission.  They even spoke of ‘back twinges’ on particular rotations.  I cued them “contract the different parts of the stomach” in the sticking points.  Abdominal activation should alleviate the drive through the back and allow the tautness in their hips to lessen.  To everyone’s delight, within a few seconds, they gained an inch or two in depth, showed much less discomfort, and were breathing deeply.

If you’ve been working on tissue quality (rolling, massage, myofascial release) and still aren’t getting anywhere with your stretches, check your posture and reposition tension to help ease into the stretch.