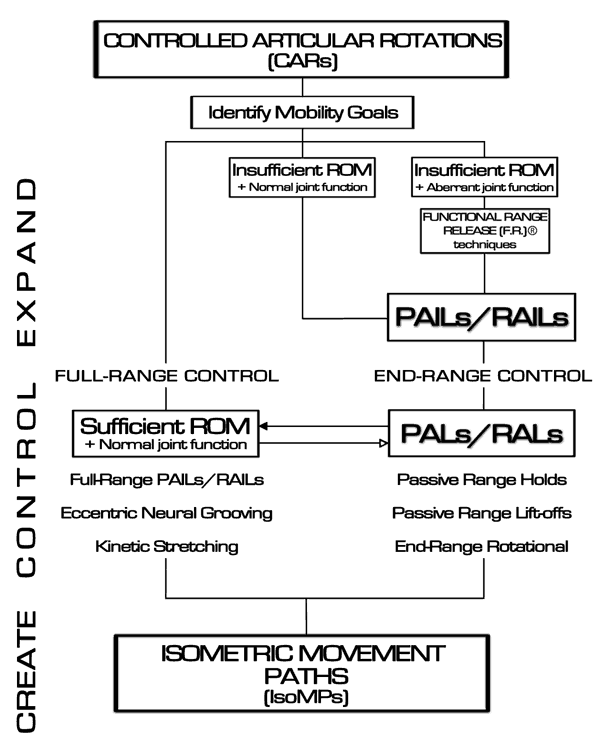 They are meant to:

Before beginning, we cannot assume a joint lives in neutral.  Axial rotational positioning has an influence on perceived flexion, extension, and abduction and adduction.  They don’t simply take the joints through these planes of motion — they alter the brain’s recognition of where a ‘normal start’ resides:

Elevation and/or depression is a sign that a joint is not centrated.  Rotation without centration will just exacerbate issues.  Shoulders, for example, tend to shift anteriorly from being held in a rounded forward posture.  Hanging from a bar helps center the glenohumeral joint in its socket.  Gravity pulls the body straight down, opening the shoulders and shifting the humerus back into the glenoid cavity. The capsule is the deepest part of a joint.  It is first to report to the CNS.  In assessing the capsule we can assess the joint and its function in individual degrees of freedom (or stickiness).

When circling, pinch points are a sign of joint issue.  Where the pinch point(s) lies in relationof the direction of the circle dictates whether the problem is tissue-based or biomechanically-based. yellow: direction of the circle

An opening angle pinch signals a tissue problem.  Work through it.    A closing angle pinch indicates there is a biomechanical problem.  There is a structural or neurological glitch.  Forcing it can cause further damage.  Specific stretching or release would be the protocol.  In general, keeping a slow, steady speed ensures that you are in control.  Loosen the tension as you come across a speed bump and continue through with deliberate practice.

Joint rotations can be done in a multitude of ways, not just those promoted by the FRC system.  Here Emmet Louis gives his take on a full body sequence:

The body adapts to the demands placed against it.  The adage of if you don’t use it, you lose it, applies directly here.  Likewise, if you’ve lost it, it will take time and effort to regain it.  Remember how long and little it took to escape you.  Consistency is the key to regaining and keeping function.  #almosteverydamnday.  (I am nothing if not honest).

It is important to point out that the limbs are translations of the spine.  Asserting your control over your neck and spine before moving to the joints of the arms and legs will go a long way in ensuring work gets put in where work is needed.  (A thorough how-to can be found in the link).

The idea behind tensing every one of your joints/muscles except the one your are moving is meant to isolate the joint and promote articular independence.  Control means just that — how well can you get a single joint to do what you want it to do without influence or interference from other joint(s).  Assessments tend to start with low irradiation, 30% or less.  When you ramp up the tension, though, the test becomes a workout.  It’s hard to squeeze every single one of your muscles AND control the movement of a joint.  Once you move through about 70% tension, the moving part itself gets bogged down, as if it was moving through a thick fluid.  There is a huge distinction between a free flowing joint and a joint you are providing resistance to.  The former is to test a joint and the latter is to work the joint through larger and larger circles.

The Role of Gravity

Gravity is the one constant load being placed upon our bodies.  When manipulating it, we must consider how we usually hold ourselves (how it typically acts upon us) and which muscles of the joint we wish to put more stress on.  More work will be done by whichever muscles are placed against the pull of gravity.

Here’s an upright version of glenohumeral CARs with a focus on the superior shoulder:

One from quadruped position focusing on the posterior muscles of the back:

And one from a supine position focusing on the anterior shoulder and chest:

Lying down instead of being supported by our limbs helps force the core musculature to drive the movement.

Hinge joints of the elbow and knee are particularly difficult to isolate.  Mid-joints, by design, should be intricately connected to those above and below.  Working them in isolation can be tricky.  You have to consider the flexion-extension implications of the movement.

Here’s a bit of a figure-8 as shown here with the elbow:

Keeping the shoulder pinned to the body helps keep glenohumeral rotation out of it.  Also locking the hand (performed in nuetral instead of a balled fist to maximize ‘natural’ position behind the back) helps deter wrist involvement.

Another option is to use lateral movement of the distal joint to see how that effects flexion and extension:

Finally, consider the placement of the proximal joint (hip or shoulder) and how the musculature responds:

Gravity AND position play a role in this hamstring dominated movement.

One simple thought here — get the joint moving in the direction of the injury as soon as possible.  Injury equals restriction, and if hypermobilizing a joint in one direction (and under load) caused harm, we must remind the brain as soon as possible that we still want it to go there; that movement in this direction is normal and OK.  As it heals, then, cells will be laid down that understand what they are supposed to do.  There’s less convincing and compensation that occurs once load is applied, quickening a return back to functional.