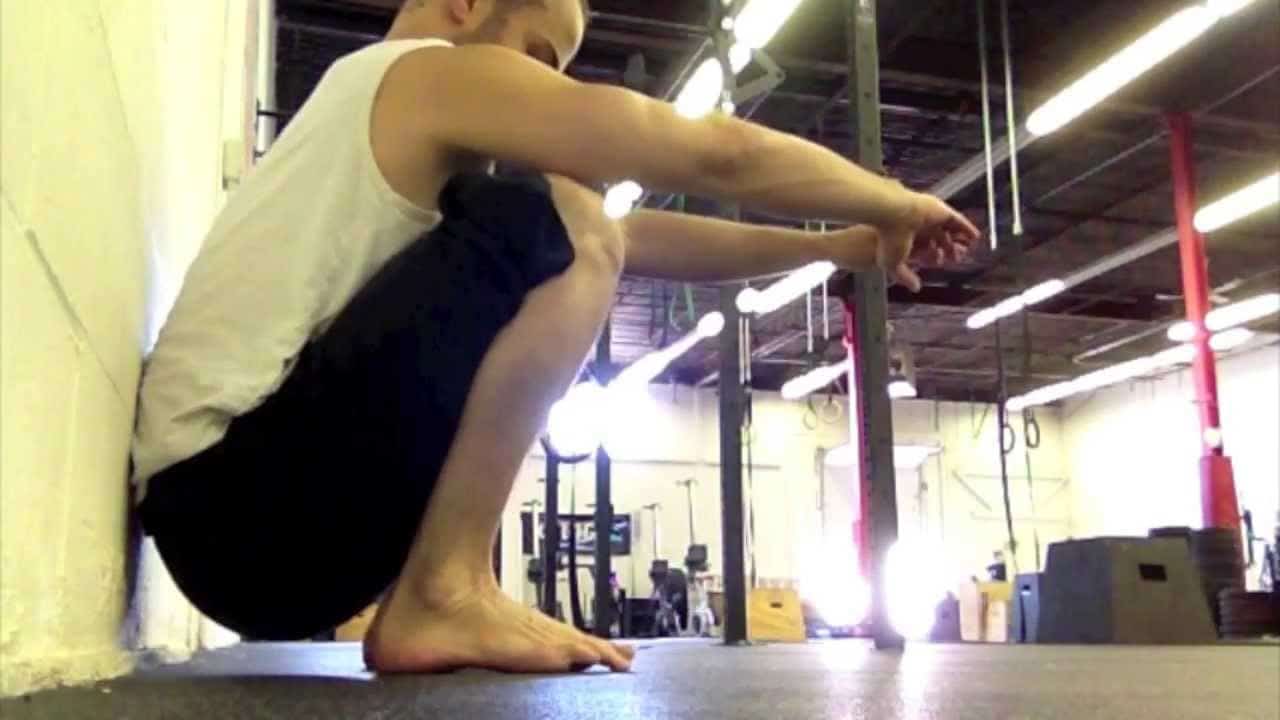 Tibial rotation is necessary for keeping the knees in line with the ankles during a deep squat.  It also greatly influences walking gait and joints of the knee, hip, ankle, and foot. Issue with any of these patterns or places warrants a look at the lower leg, particularly its ability to internally rotate.

Taking cue from the new joint-by-joint approach of Functional Range Conditioning, looking at joints independently (as opposed to part of a larger movement) can pinpoint a problem area AND give clarity into its limitations.  Working joints give way to a freedom of expression that can be demonstrated in any movement.

To isolate the tibia to assess rotational control, lock the upper thigh from rotation (we’re not testing what the hip can do) and pull the foot into dorsiflexion:

Dorsiflexion makes the giant tibialis anterior pop up, outlining the shin bone.  Pre-tensing the muscles of the area you aim to mobilize helps distinguish between any contraction and intended contractions.

If mobility issues prevent you from getting into the thigh-hugging position shown above, you can give yourself other biofeedback markers, such as a tape flag:

“There should be no ankle movement without tape movement”.

Another modification is to using a wall slide with a band to pin the thigh.  Slide the foot down as far as you can keep the heel on the wall and the toes off:

This doubles as a dorsiflexion exercise, using the wall press to avoid the big toe side of the foot pulling up more than the pinky side.

Taken one step further (should mobility allow), you can combine the two movements to mimic deep squat positioning, heel close to butt:

Without the capability to create tibial torque, the feet will splay out as the hips sink during squats.  The foot arch caves in, and the knees, though wide, will follow.  The difference between a functioning and dysfunctional squat can be seen here:

A corkscrew is created through the ground by not moving the feet.  Disassociating the tibia from the ankle is just as important as creating uniform motion between the two.   The following video attempts to summarize an astute tutorial by Dewey Nielsen:

Finally, be thoughtful about what movements you use to evaluate joint function.  Larger patterns leave room for more variables to creep in.  Take eccentric neural grooving, for example.  Dr. Spina’s clever example of controlling dorsiflexion and tibial rotation in the deep squat seems to be only limited by the anterior compartment of the leg.  Looking closer, however, thoracic flexion is a necessary prerequisite towards getting off the wall.  Faulty shins could be blamed for a problem caused elsewhere: