If your low back hurts while you’re lying on your stomach, it’s likely because you’re stuck in anterior pelvic tilt and your lumbar lumbar spine is folding over onto itself.

Extending your upper body upward exacerbates the issue.  The lower back is not a hinge or mobile joint.  It’s meant to be stable and kept relatively rigid.  Like a credit card, it’s only got so many bends until it breaks.

To test if you can get OUT of anterior tilt and into posterior pelvic tilt, first try it on all fours, in a slow segmentation from head to tail:

For you yogis out there, this is cat-cow.
If you’re too stuck to get a turning in the pelvis (tailbone to nose) try these.
Once you can get posterior pelvic tilt, see if you can isolate/keep it by separating the movement from the upper body:

The hard part of transferring this skill to the floor is your hip bones getting in the way.  It’s an odd and hardly used pattern, but it’s excellent in checking for application:

Abs engaged, low back relaxed.
The position stays during the elbow press up, and there is no strain in the low back.
THIS IS THE SAME PELVIC POSITIONING YOU WANT IN PLANKS AND PUSHUPS.

Like planks, it’s the arm position that makes or breaks the core coordination of this exercise.

Here’s a progression toward finding your level and optimizing elbow/forearm positioning:

1.  Elbow low towards your hips and in toward the spine 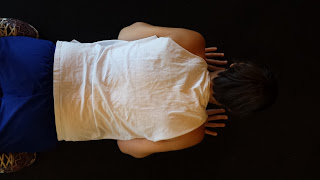 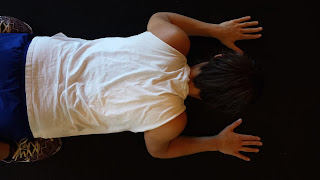 3.  Elbows at ears (longer lever for the core to stabilize) 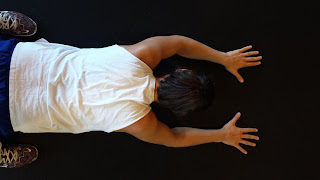 When you push the chest up, drive through the elbows and press your sternum away from the floor.  Widen the chest and extend the base of the skull upwards, elongating the neck.

Aaron Swanson shows the many variations you can use once you can maintain this position pain free to move the arms and practice core stability:
TO REVIEW: