At then end of Prone Positioning Part 1, we kept the torso still while we moved our arms.  Crawls are initiated when we move our feet.

To begin, we start with the set up.  It’s similar to the sphinx in that the thumbs are in line with the nose, but the hands remain close together while the elbows are set wide. 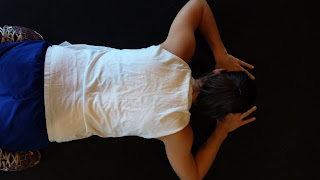 1. Knee Slides and Lifts
Turn the head and look in the direction of the moving knee.
You should feel these in your obliques.
Notice how the hips turn in each one of these movements.  The moving side will roll upwards.  Press down on the opposite forearm to raise the leg.  The knee should end up near belly button height.

The hips move in a diagonal motion, which is made very apparent from the aerial view.

Why are we off the hands and feet?
To keep the core, hips, and shoulders honest.
Shortened levers have less cheats for stability.

Below Dewey Nielsen takes the static crawl locomotive, and brings in a bear crawl.
Value the control.